Our Verdict:
The Sceptre E255B-1658A is an excellent monitor for competitive gaming. It offers all the features a serious gamer would want in his monitor like high refresh rate, low response time, and FreeSync support. Its decent image quality and affordable price places this monitor miles in front of most of the other monitors in its price range. I recommend you to go for it. You’ll be totally satisfied with its performance.
Image Quality:
 4/5
Ergonomics:
 3.8/5
Performance:
 4.5/5
Value for Money:
 4/5
Overall :
 4/5

The Sceptre E255B-1658A offers competitive gamers a serious monitor for a great price. Its specs seem great on the paper. How well does it hold up in real-world conditions? Read this review to find out.

It has a pixel density of 90PPI. Images and text appear sharp and detailed.

The Sceptre E255B-1658A has a brightness rating of 300-nits and a contrast ratio of 1000:1. Despite its ordinary specs on paper, the monitor is bright and its contrast levels are decent. The visuals are vivid and sharp looking.

It is not only impressive in its color quality but also in its overall brightness and contrast levels for a TN panel monitor. This will make your gaming experience more immersive.

Like any other TN panel monitor, you will have narrow viewing angles. This won’t be a major issue as you there will not be any shift in color, brightness, or contrast levels as long as you face the monitor directly.

This monitor we reviewed had no issues of backlight bleeding. It also did not have any dead pixels on it. This varies for each user.

The Sceptre E255B-1658A has an anti-glare coating on its screen. You can play games on it even in bright environments without any distracting reflections forming on it.

Overall, in terms of image quality, the Sceptre E255B-1658A is surely impressive. 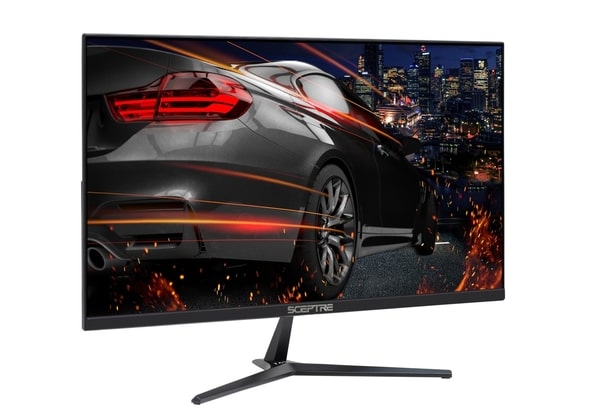 The Sceptre E255B-1658A comes in a sleek design. It also has thin-bezels that give it a sharp look. It offers fewer distractions when you use it for multi-monitor gaming setups.

The overall build quality is decent. Its cabinet is made of good quality plastic that is durable and its v-shaped stand is made of metal. The stand is sturdy and doesn’t wobble.

There are five OSD (On-Screen Display) buttons present on the backside of the monitor towards the right-hand side. They are responsive and can be reached without any difficulty.

In terms of ergonomics, you only have the -5°/15° tilt functionality. You cannot adjust the height, rotate the monitor, or swivel it. There is a 75x75mm VESA pattern that you can use to wall mount it effortlessly.

In terms of connectivity, you have: 1x DisplayPort 1.2, 1x HDMI 1.4, and 1x HDMI 2.0. You also get a 3.5mm headphone jack. This monitor has 2 x 2W built-in speakers. Their sound output is average. We suggest buying external speakers for a better gaming experience. 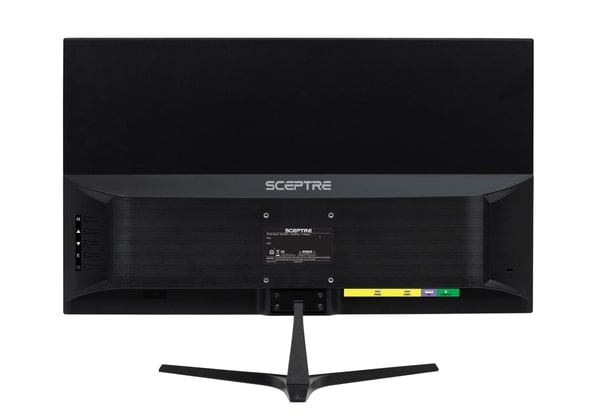 The Sceptre E255B-1658A truly shines in terms of its performance in gaming. It has a massive 165Hz refresh rate. Gameplay will be buttery-smooth.

Since most esports games won’t tax your graphics card too much, you can enjoy super-smooth competitive gaming even with a budget build.

It has an ultra-low 1ms response time. Its input lag is around 5ms and is totally imperceptible. You will have all the competitive edge in esports games.

The Sceptre E255B-1658A also supports AMD’s FreeSync technology. You can game on it for long hours without worrying about screen-tearing, stuttering, or any lag. 10-series Nvidia cards and above also work flawlessly.

The FreeSync has a range of 60-165Hz so it supports Low Framerate Compensation (LFC). This means that, if your FPS in video games is below 60, the refresh rate of your monitor will double at that instance. This will result in less ghosting for you while gaming.

You can also turn off the overdrive option using the OSD menu if you’re playing a graphically intensive game like Red Dead Redemption 2, Control, etc., where you won’t be getting 165FPS. This will reduce ghosting in such games.

Once you’re back in competitive games, simply turn on the overdrive option and enjoy a high refresh rate gaming without any ghosting or trailing.

Overall, the Sceptre E255B-1658A has everything a competitive gamer would want on his monitor. 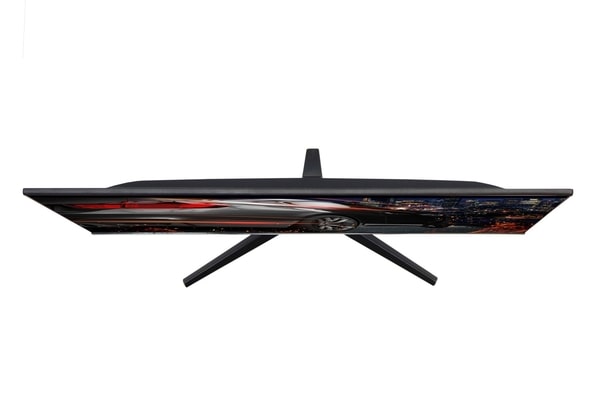 The Sceptre E255B-1658A also comes with all the necessary eyecare features. It has a blue light filter and it is also flicker-free. You can game on it for long hours without worrying about eyestrain and headaches.
You also get pre-calibrated picture presets like Standard, Movie, ECO, FPS, and RTS.

If you’re not satisfied with them, you can simply adjust different properties like color, brightness, contrast, temperature, gamma, etc. The OSD menu is fairly straight forward and also user friendly.

The MSI Optix G24C4 is an excellent alternative to the Sceptre E255B-1658A. It has decent image quality and all the essential gaming features like 144Hz refresh rate, 1ms response time, FreeSync support etc. You will definitely feel satisfied with it.

The LG UltraGear 24GL600F-B is a decent gaming monitor. It costs the same as the Sceptre E255B-1658A. It comes with 1ms response time, FreeSync support, and 144Hz refresh rate. The overall quality of this monitor is very good and it justifies its price tag.

The Acer Nitro VG240Y Pbiip is an IPS gaming monitor. It costs you $20 more than the Sceptre E255B-1658A but offers you both impressive image quality and excellent performance in-game. It more than justifies its $20 premium. You also get a 144Hz refresh rate and 1ms VRB Response time.

The Sceptre E255B-1658A is an amazing monitor for competitive gaming. You get a decent image quality, low response times, high refresh rate, FreeSync Support without compromising on any major areas. If you’re on a tight budget, I suggest you get this monitor. It will serve all your gaming needs and will offer you all the competitive edge in video games. You will definitely be happy with your purchase.

1.Those who want an affordable monitor for competitive gaming.

2.Those who want a thin bezel monitor for multi-monitor gaming setups.