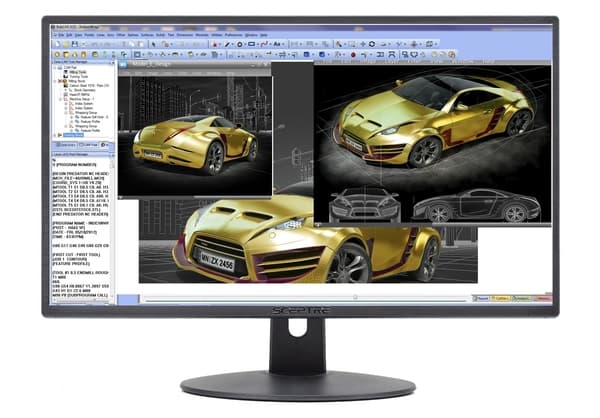 Our Verdict:
The Sceptre E275W-19203R is an excellent monitor for mixed usage. It has everything an average user would want in his monitor like a large 27-inch screen, decent image quality, high refresh rate, FreeSync support, and most importantly, it comes at an affordable price. You can use it for everyday usage, causal gaming, work/office purpose. It offers better performance per penny than most of the other monitors in its price range. I have no trouble recommending it.
Image Quality:
 4/5
Ergonomics:
 3.5/5
Performance:
 3.7/5
Value for Money:
 4/5
3.8
 3.8/5

The image quality of the Sceptre E275W-19203R is decent. It is better than most TN panels monitors. Colors don’t feel washed-out. VA panels are known for their superior contrast ratios. This results in sharp-looking images and text. Though it is not suitable for color-critical work like graphic design, you won’t have any problems while watching movies and playing games.

The colors are lively and pop out. Images also have a certain depth to them. The blacks appear darker and the whites appear brighter. Images appear realistic.

It has a brightness level of 250-nits and a contract ratio of 3000:1. The monitor is fairly bright. You might want to tone it down in some cases.

The Sceptre E275W-19203R has decent viewing angles. They are not as wide as those you see in IPS panels but they are not too narrow like those in TN panels either. You get 160° vertical and 170° horizontal viewing angles. You won’t have any shift in colors, brightness, and contrast levels as long as you face the monitor directly.

There are no dead pixels on the monitor we reviewed. There was a little backlight bleeding on it towards the edges. It is only visible in dark areas during gameplay. It is definitely tolerable. You can also reduce it by lowering the brightness.

The Sceptre E275W-19203R has an anti-glare coating. It will help you diffuse any distracting reflections from forming on it. 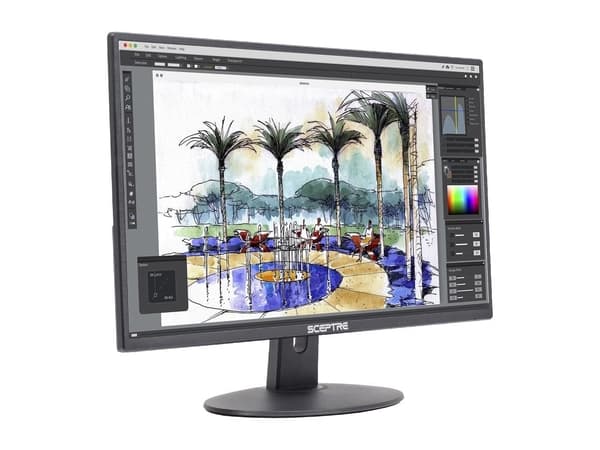 The Sceptre E275W-19203R has a slim design. It has thin bezels that will help you have fewer distractions while using it for multi-monitor setups. It has a silver-colored cabinet. It looks simple and professional.

There are five OSD buttons placed on the backside of the monitor towards its right-hand side. They are responsive and easy to reach. They lack labeling though. It would have been better if they were placed on the lower bezel and had labels. They help you navigate the OSD menu, adjust the brightness, volume, contrast, etc.

The overall build quality of the Sceptre E275W-19203R is decent. It is made of good quality durable plastic. The stand has a circular base and is a bit wobbly. You won’t have any problems if you put it on a stable desk.

The ergonomic capabilities of this monitor are limited to tilt (Backward: 15° / Forward:5°). You cannot adjust its height, swivel it and rotate it. Thankfully, there is a 100 x 100mm VESA pattern present. You can wall-mount the monitor or connect it to a third-party stand using it.

The connectivity options of the Sceptre E275W-19203R include 2x HDMI and 2x VGA. You also get a 3.5mm headphone jack. It has 2 x 3W built-in speakers. Their sound output is average. I suggest you buy external speakers for a better audio experience. 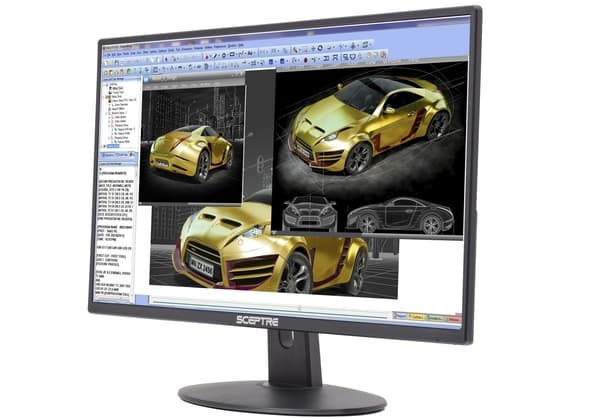 The Sceptre E275W-19203R is a fairly decent choice for casual and console gaming.

It has a refresh rate of 75Hz. Those moving from a 60Hz monitor will feel a slight but noticeable difference in the smoothness during gaming.

It has a 5ms response time and its input lag is around 11ms which makes it imperceptible. It is more than enough for casual gaming. There was no major ghosting and trailing in games.

Another important feature of this monitor is FreeSync support. You get to play games without having to worry about stuttering, lagging, or screen-tearing during gameplay.

10-series and later Nvidia cards also work without any issues. This is a really helpful feature for gamers and is mostly present in high-end gaming monitors. It is impressive to see Sceptre include this feature.

It is also a great choice for consoles like PS4, Xbox One, and Nintendo switch. Its picture quality will make gaming more immersive. 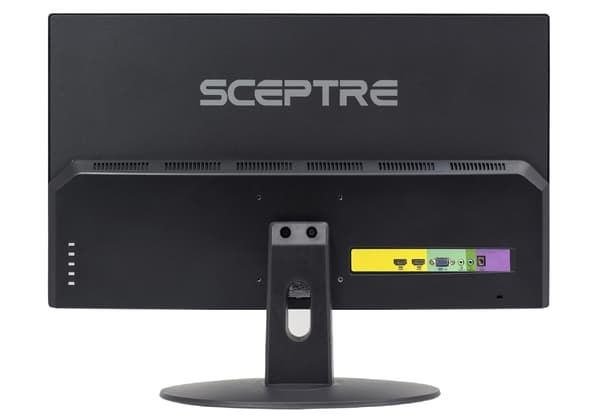 You can comfortably use the Sceptre E275W-19203R for long hours for work or gaming without having to worry about eye strain or headaches. This is because it has an inbuilt blue light filter and it is also flicker-free.

It has several image presets like Standard, Movie, ECO, FPS, and RTS. They will help enhance your overall viewing experience.

The ViewSonic VA2759-SM is a 27 inch Full HD Monitor best suited for Home and Office usage. It has decent connectivity options, an affordable price tag, and offers a good value for money.

The ASUS VA24EHE is a 24-inch Full HD monitor. It comes with impressive image quality, 75Hz refresh rate, FreeSync support, and an affordable price tag. If you are looking for a 24-inch monitor for causal gaming, office work, and multimedia consumption, the ASUS VA24EHE is a great choice.

The HP VH240a is a 24-inch Full HD monitor. It is best suited for office work and multimedia consumption. It comes with Built-in Speakers and a fully ergonomic stand. It is a high-quality monitor that comes at an affordable price.

The Sceptre E275W-19203R is definitely worth the money. If you’re looking for an affordable monitor for mixed usage, I would totally recommend this monitor. It offers great value for money and comes with features that are of use to most average users. You will be definitely satisfied with it.

1. Those who want an affordable eye-friendly monitor for long hours of office work or programming

2. Those who want a pocket-friendly monitor for regular usage like surfing the web, managing documents, watching movies, YouTube, working with Microsoft office, etc.

3. Those who want a monitor for casual gaming and Console gaming on Nintendo Switch, PS4, and Xbox

4. Those who want a frameless monitor for multi-monitor setups

This review of the Sceptre E275W-19203R covers everything you need to know about it. All its pros and cons are explained. Its complete specs and other alternatives are also mentioned.